In case you ever thought that scholars are somehow exempt from criticism, simply because they have a PhD (or two, or three), think such things no more. Have a read through this and you’ll see what I mean.

While raising a couple of interesting points, this rant about being entitled to use phones at dinner is ultimately a sad commentary.

This has been done before, but let’s have fun doing it again. The deal is rather simple: take a picture of your computer desktop, supply details about the image, post it to your blog, tag a few people, sit back and enjoy being a nerd. Here’s my meagre contribution to nerddom: 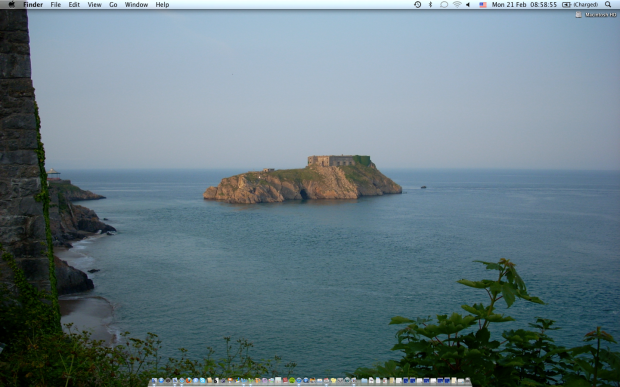 Details:
1. Picture is of St Catherine’s Island that I took while in Tenby, Wales with my gorgeous wife
2. Icons, from left to right: finder, appstore (new one), dashboard, mail, safari, firefox, iChat, skype, address book, scrivener (awesome), pages, keynote, numbers, word, excel, publisher, entourage, iFlash (awesome), iFamily (not working at the moment), dictionary, spotify, iTunes, quicktime, iPhoto, iProcrastinate, calendar, stickies, system preferences, time machine (it’s a hoax; I haven’t been able to go any where [or, any time]), and preview.
3. The rest: general folder, NETbible, my notes on revelation, document file, E. Jacquier (History of the Books of the New Testament: St Paul and His Epistles [1907]), G. Vos (‘Eschtatological Aspects of the Pauline Conception of the Spirit’ [1912]), my notes on Jacquier, my notes on Christian mediation, previous sermon on false teachers, upcoming sermon on ‘study’, greek vocabulary (just to stay fresh), lesson for kid’s woship (yesterday), my notes for our weekly home-group study on James, J. Ropes (Critical and Exegetical Commentary on the Epistle of St James [1916]), and a safari window.

For the five or six of you who read this: you’re tagged.

This video has been making the rounds in the blogosphere.* I saw it first on Jim West, then Joel Watts, and then Gavin Rumney (a new blog to me). The main reason why I’m reposting it is because Rossing provides an explanation that needs to be considered, at least as a beginning point for a proper understanding of what the Bible teaches. I’m also a tad sadistic in that I enjoy seeing weak/poor theology being smacked around.

Near the start of January, I began a series of posts on the nature and merits of James Melton’s ‘statement-of-faith-via-20-questions’. (Go here for part 1, and here for part 2).  One of the curious features of Melton’s presentation is his (nearly dogmatic) insistence on simple ‘yes’ or’ no’ responses to the questions he poses. Another curious feature is his insistence that if simple ‘yes’ or ‘no’ responses are not forthcoming, then the statement of faith is somehow defective–if not heretical.

As I mentioned in the previous post in this series, simple ‘yes’ or ‘no’ responses to Melton’s questions are not always so simple. This is especially the case when the question asked is not entirely clear, or if the question is meant to uphold a particular belief that is certainly questionable. This leads me to wonder if Melton is concerned with upholding biblical truths or if he is seeking to advocate a particular interpretation of those truths and call that interpretation, ‘biblical’.  I’ll leave that hanging for now. Let’s get back to the questions.

5. Do you believe that the Lord Jesus Christ died and paid for our sins on Calvary’s cross through the shedding of His own sinless blood?

For the most part, yes.  Why do I say, ‘for the most part’?  I’ve become less comfortable with ‘paid for’ language when it is applied to Christ’s work on the cross. Please hear me on this: I am not saying that Christ’s work on the cross was ineffectual; I am simply saying that I do not think describing it in ‘paid for’ terms is the best (or, most complete) way.

We need to bear in mind that ‘paid for’ language comes mostly from Anslem’s theological struggles as viewed through a feudal system of society. I will admit that ‘paid for’ language does appear to have roots in ‘redemption’ themes in the Bible,[1] especially when the idea of ‘redemption’ is compared with the slave-market of the ancient world. However, we need to recognise the ultimate focus of this sort of imagery. Just as with the slave-market, the biblical emphasis on the meaning of the cross is not simply about the transaction; it is about the effect or result of the transaction.

6. Do you believe that the Lord Jesus Christ rose physically from the dead for our justification?

Again, for the most part, yes. Why is there a ‘for the most part’ again? Well, I understand Melton’s thinking in this regard (and in many ways, I’m glad to see it stressed), that without the resurrection the problem of sin would remain (per 1 Cor 15.12-19).[2] In that sense, belief in Jesus’ resurrection as it relates to our justification is certainly vital. However, where I hesitate (slightly) is Melton’s decision to link justification with the resurrection only.

I hesitate primarily because the biblical teaching also links justification with the meaning and work of the cross. Paul often argues that our justification (or, righteousness) is contingent upon the work of Christ in the cross (2 Cor 5.21; cf. also Rom 3.23-26; 5.15-21; Gal 2.20-21). So, again, while I understand that this work on the cross is contingent upon the reality of the resurrection, I do not understand the need to link justification only with resurrection when it is equally linked with the cross.

7. Do you believe that the Son of God, the Lord Jesus Christ, currently sits at the right hand of God the Father as our High Priest?

Yep (oh, sorry: ‘yes’). I particularly like the ‘currently sits’ part because it says something crucial about Jesus’ present role.

However, now that I think about it, I would have liked to see the ‘sitting at the right hand of God’ fleshed out a bit more–in the sense of Christ’ present enthronement as Lord and King. If Melton is coming at things from a particular Dispensationalist perspective, then I can understand why this idea is not fleshed out. And if that is the case, then I might need to modify my response so that it reads, ‘Yes, but . . .’

This taken from my ‘iStatPro’.  I’m no computer geek, but I have a feeling that the combination of those figures is not good.

Side-stepping the fact that a 61-year-old woman gave birth to her own grandson (props to her), I was a bit puzzled by the description which reads:

Ms Connell, 35, and her husband Bill are the biological parents of the baby boy, Finnean Lee, who was conceived through IVF, but carried by her mother.

What puzzled me was the use of ‘Ms’ for a married women. At first I thought it might have been a typo, but the rest of the article uses the same designation. So, either the writer mistyped a bunch of times on the same thing, or something else is going on.

Am I missing something with regard to this use of ‘Ms’ for a married women? Or has the PC (not the computer) insantity become more ridiculous by extracting anything that looks masculine, thus castrating the ‘r’ out of the title?

Those who have wandered here

Peripatetic Learning
Create a free website or blog at WordPress.com.